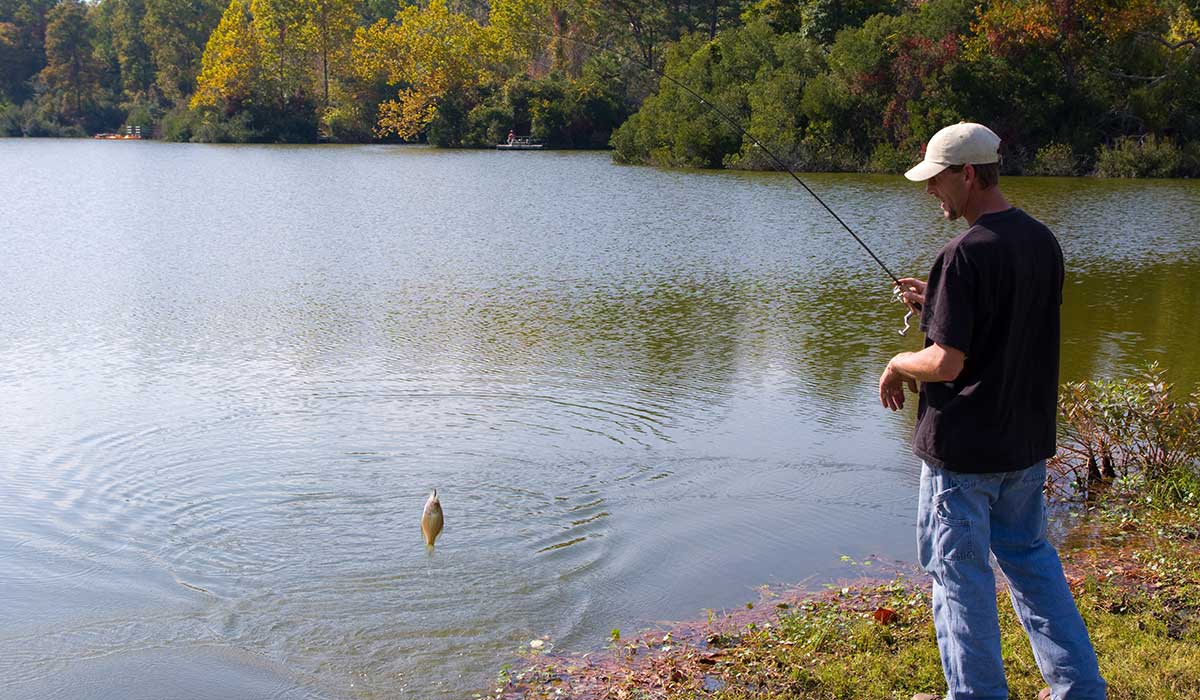 Crappie is a popular game fish that are caught by anglers for sport. Nowadays, anglers catch them for practice and release them back into the waters. These fish are found in both freshwater and saltwater.

While going fishing knowing the right time is important along with where to fish. This fish is easy to catch but hard to find as they rarely stay in the same place for a few days. They are nomads without fixed habitation.

But they stick in a group thus if you are able to catch one you are likely to find others in the same spot as well. Their movements are usually hard but during spawning time they are predictable.

So, anglers most of the time focus during their spawning period. Fishing during this time is considered fun by many anglers.

Angling for crappie is more popular in North America. Their various methods but the most used method is the spider rigging.

Crappie fishing is done throughout the year. They don’t semi-hibernate so they are prime targets during ice fishing. You can go fishing for them at any time of the year.

Thus to help you know more about the seasons we have made this article on the best time to fish for crappie. 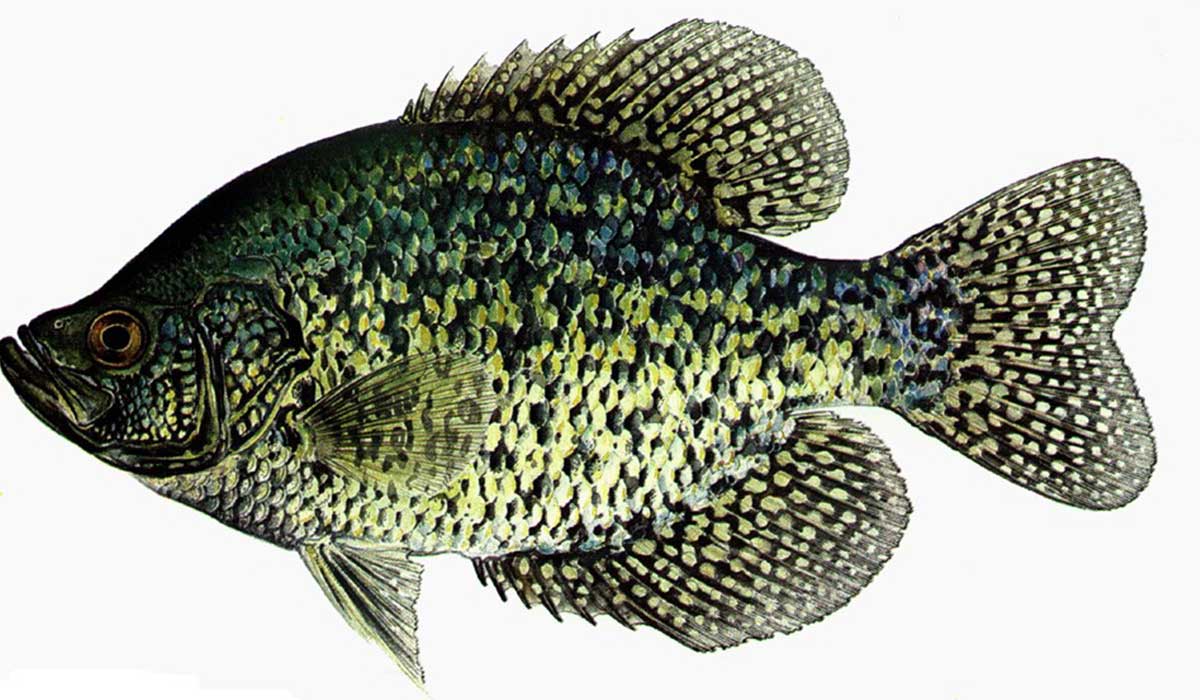 Crappie fish is a member of Sunfish family Centrarchidae. And native to North American freshwater fish. These species are popular panfish that don’t outgrow the size of the pan. They are edible species as well.

The currently recognized species are black crappie and white crappie in this genus. The black crappie is dark in coloration with dark spots on the sides. They can be found in olive to bright green or bluish gray color. They have 7 to 8 spines and have no vertical marking in the side.

As for the white crappie, they are light in coloration and have yellow markings on the sides. They are found in olive to bright green color. They have 5 to 6 spines and have vertical bars on the sides.

They are predators as well as prey, the adult crappie feed on species of the smaller fish. It also includes younger ones of their predator. These are schooling fish that will stay with other species of panfish as well.

Crappie is often considered one of the best tasting freshwater fish.

Where To Find Crappie?

Before deciding the best time of the year to fish crappies, you should know where you can find them. They might be easy to catch but at first, you need to know about their habitat.

Knowing about the location is important as you can find them at any time of the year. Crappie doesn’t have a fixed habitat. So they mostly roam around natural lakes, reservoirs, and large river systems.

They usually stay in an underwater structure like fallen trees, weed beds, and many more. These fish prefer large ponds and shallow parts of the lakes that have sand and mud at the bottom.

Crappie stays in spots that have a wide range of vegetation and wildlife. It helps them provide food and coverage. Thus keeping this in mind you can look for locations to go crappie fishing.

Best Time to Fish For Crappie 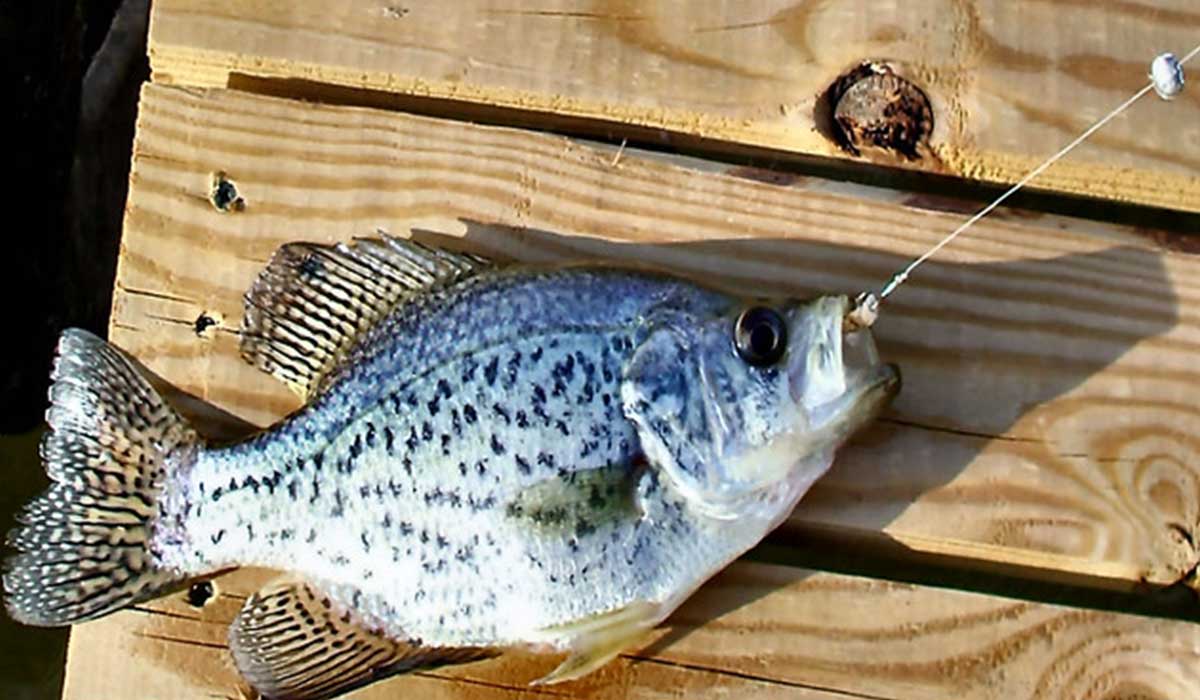 The best thing about crappie is that they can be fished all round the year. You can go crappie fishing at any time of the year you want too. They are a bit difficult to spot. But if you have proper knowledge about their habitation it will be an easy catch.

Given below is brief information about the best time to fish for crappie:

Spring is the season of spawning for the crappies. The months from early March to late May fall in this season. During this season, the water temperature ranges from 48 to 55 degrees creating warming water.

As the temperature rises above 50 degrees, they start shifting toward the spawning area. This area is in reedbeds near the bays as they prefer shallow water for spawning.

Depending on the water clarity they spawn in different depths. If the water is clear they go deep even till the depth of 20 ft. But if the water is musky they stay near the surface and can be about 1-foot below.

You can use a trolling motor to get more bites. And move slowly and quietly near the shorelines with vegetation, woody debris, and many more.

Summer season is when the crappie resides deep in the water to stay cool during peak temperatures. This season falls under the month of June to August. The water temperature ranges from 55 to 62 degrees creating warm water during this season.

The water is very warm during this season so these fish will dive up to 15 to 20 ft searching for cool temperature. During this season, you can adopt the technique of trial and error.

You can stay put in a particular place for some time and if there is no activity move to another spot. While fishing around vegetation you could use vertical jigging as it works best for more bites.

The water is warm during daylight so you will have to fish in depths. And there are low chances of getting many bites. Thus it is better to fish during the night as the light attracts insects and baits that draw their attention.

You can search for them in rock piles, humps, and weeds as well. They usually hang at the shoreline breaks and edges of tapering points. If you don’t get any bites you can use different jigs.

As the fall season begins the crappie starts to move towards the basin area. They are predictable and aggressive during this time. The months from October to November come under this season. The water temperature ranges from 50 to 60 degrees creating cooling water.

During the fall season, they create tight groups and stay along or inside the weed lines. But as the weed starts to die they move around sunken islands, rock piles, and dive deep in the waters.

In late fall, they move deeper into the water and stay there for the entire time. Some stay near spring holes as the water is warm there compared to the surrounding water.

Winter season is the best time to ice fish for crappie. This fish doesn’t hibernate making it a great target for ice fishing. The months of late December to early February comes under this season. The water temperature ranges from 38 to 48 degrees creating cold water.

As the winter season begins they travel deep into the water and stay there for winter. They stay up to a depth of 20 to 40 ft during this season. They feed on minnows and insects.

While fishing during winter you have to retrieve very slowly to catch them. They will be staying in high schools this season. So if you are able to find the right place you will hit the jackpot.

Best Time of the Day to Catch Crappie

The best time of the day to catch crappie can depend on the month you are planning to go fishing. As the temperature changes according to the season. So it depends on which time you have decided to make the catch.

If you are fishing during warmer months then early mornings just after the sunrise. And late evening about 1 hour before the sunset is a perfect time. Nighttime fishing is also a great choice as the night light grabs the attention of crappie.

But, if you are planning your fishing during colder months then midday is a great option. As during this time of the day, the temperature of water and air is quite warm. This time seems to work best for both white and black crappie.

Crappie fishing can be done at any time of the year. In earlier periods, spring and fall seasons were the best time to fish for crappie. But as slowly things modernized people realized they can fish for crappie during other seasons as well.

These fish can be found all around the year but knowing its location is very necessary.

Hope this article on the best time to fish for crappie helped you decide which season you would prefer. Ice fishing for crappies is also an exciting adventure and experience.