Home » What is a Transducer on a Fish Finder
Fish Finder

What is a Transducer on a Fish Finder

An active transducer converts electrical pulses into sound waves. Likewise, the transducer with the help of a SONAR (Sound Navigation and Ranging) technology recognizes the object underwater by sending and receiving the signal in the form of an echo. Furthermore, the device further transmits various information like distance, size, and other raw data in a graphical form.

You might wonder what is a transducer on a fish finder. Read further to know more about a transducer and its working principle in detail.

How does a Transducer work?

The object can be a fish, marine vegetation, or a rock. The transducer then acts as a microphone. The display screen gets used to display the graphical representation of the fishing information. The device calculates and provides information about the shape, size, and altitude of the object.

In fact, the transducer’s power and frequency are crucial for the accurate measurement of the length and weight of the object. Similarly, the fish finder transducer computes the distance between the boat and the object. This process computes the time taken to send and receive the signal. The assumptions of two constants help to measure the fishing data.

The transducer comes in various sizes and shapes. A powerful and advanced transducer has a high work rate. The transducer works in two parts. It converts the DC (Direct Current) or the electricity into AC (Alternating Current). Then as a second step, it converts the AC(alternating current) into sonar waves or sound energy.

The basic working principle of a fish finder is pretty simple. To summarize, the transducer produces the sonar signals and sends it underwater. When this signal hits an object underwater, the sonar wave takes an estimate of the object’s size and depth. Also, it can be any object like a fish or other debris.

The sound wave then returns in the form of an echo. The information then gets fed back to the device. The device then creates an image of the activity beneath you in the water. This image then gets displayed on the screen, and the user can interpret as visual data.

What is a Transducer made up of?

Tiny piezoelectric crystals are mass-produced in large labs. These crystals of a specific shape and geometry get used in converting the energies. Barium Titanate or Lead Zirconate Titanate is the primary material used in making these crystals. These crystals effectively convert electricity into sound.

The crystals grow or contract when exposed to electric currents. Alternating current gets used instead of the direct current. This fact enables the crystals to expand, contract, and vibrate. This process of the crystals vibrating, expanding, and contracting produces sound. These crystals vibrate again when it hits an object creating sound waves in return.

The Piezoelectric crystals or elements are in the form of a disk, bar, or a ring. Elements or crystals linked together are an array. The more extensive the crystals are, the more noise it produces. The loud noise helps to gather definite information.

A transducer consists of these components:

How to install and mount a Transducer? 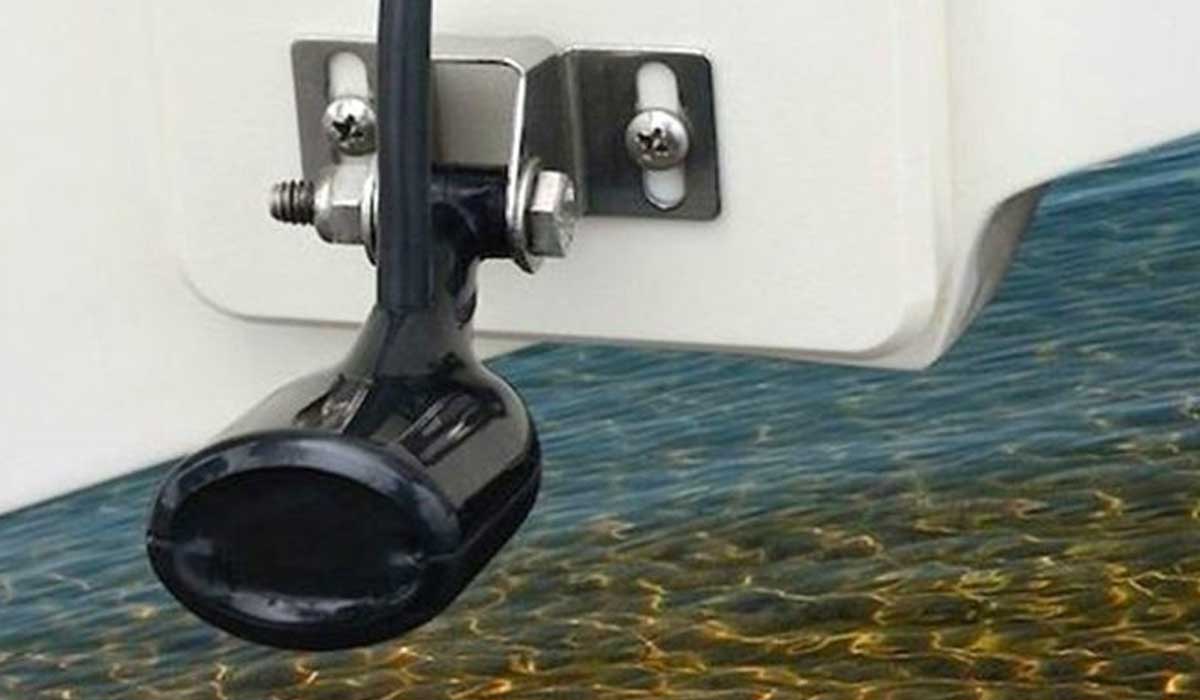 The size of these crystals plays a significant role in determining how well they will work. Doubling the transducer crystal’s diameter is equivalent to quadrupling the transducer’s output power. You can seek an upgrade to a larger transducer for better performance and higher productivity. Many manufacturers provide replacement options.

The other factor that needs consideration is the mounting choice of the transducer. The mounting decisions can affect the working condition of the fishfinder. The in-hull, through-hull, and transom mounts are the three popular mounting choices. They cand get used in modern-day boats and kayaks.

The in-hull transducers work with any engine. The in-hull mounts perform well on both power and sailboats. The only downside is that thick aluminum hulls are not suitable for in-hull installations. This drawback is because the signals can get lost in transmission through the metal. The mount is not suitable for wooden or cored fiberglass hulls.

Thru hulls provide the best signal quality and offer the very best performance at all speeds. The shaft passes through a hole in the bottom of the hull. Also, they are quite challenging to install. They also have the least amount of turbulence. Lastly, the only downside is that you will need to cut a hole to fit.

Transom mounts are best for slow speeds. The only drawback is that they often lose important details in the process. Some users have found them to be not working once the boat is on a plane surface. It is because of the turbulence created by the hull, transom, and strakes. If the transom mounts have appropriate mounting, it should work fine at slow speeds. And it could give 80-90 percent performance at high speeds.

How does a Transducer detect fish?

The transducer helps us provide an approximate estimate of the depth of water and the shape of the bottom. Fishfinders also help us in choosing the best rods, lures, weights, and other fishing equipment. The advanced transducers are very accurate and provide anglers with precise information.

The echoes of the sound waves are varying in nature. As we move in the water, some echoes return quicker than others. If the object is closer to the transducer, the sound wave bounces back much faster and stronger. These sound waves reveal the entire environment underwater.

The transducer hence takes this echoes and can differentiate between fish and other objects. The distance between the boat and the fish changes continuously as the fish swims. This feature helps the transducer to distinguish between fish and other elements. The fish id symbol of an arch lightens up to denote fish. This feature enables the anglers to make their fishing pleasant and productive.

I hope this article helped you to know how does a transducer work for a fish finder and What is a Transducer on a Fish Finder. Similarly, you also knew about transducers and how does a Transducer work. I have worked my best to answer the most asked questions related to transducers. Lowrance, Hummingbird, and Garmin are some of the most popular brands available in the market. You can choose the best transducer for yourself based on these learnings.

What Does Gear Ratio Mean on a Fishing Reel

Which Species of Fishes Are Only Found in Nepal